A Tale of Two Seasons

It's a "Tale of Two Seasons" when it comes to this growing season. Remember early in the spring, flowering trees were early, bulbs faded fast, lilacs were two weeks early and my peonies bloomed at Mothers' Day. I think it was a combination of ample groundwater from all the melting snow and the blast of hot weather we had in mid-April.

Now we approach the end of summer and where are all the late season bloomers? Of my annual vines, moonflower and mina, or firecracker flower have just begun blooming recently. Hyacinth bean vine is just blooming now, so beans won't form for a couple weeks, pushing it's showy season into September. I have no flowers on pineapple sage yet. Even the gomphrena is poking along, although I'm starting to harvest flowers.

I read an article that said tomato plants won't form blooms above 90 and beans stop flower production at 85. So that long stretch of very high temperatures in July put a lot of vegetable plants on hold. The article didn't mention flowers, but most plants are biochemically engineered to protect themselves in times of stress. It seems the late bloomers shut down also in the extreme heat and are now playing catch-up. With the average frost date,we still have plenty of time for a good late season show.

With the weather extremes, I had some great garden successes and some super flops this year. 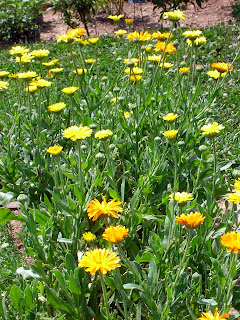 Basils - Struggled during the dry spells, but came back like gangbusters after the big rains.
Jupiter's Beard - and excellent re-blooming perennial. Re-blooming well after minimal trimming.
Lavender - Good spring bloom and looks like the beginning of a healthy fall re-bloom.

The great thing about gardening is that there's always next year with different conditions and a chance to try again!
Posted by Maryanne at 8:34 AM