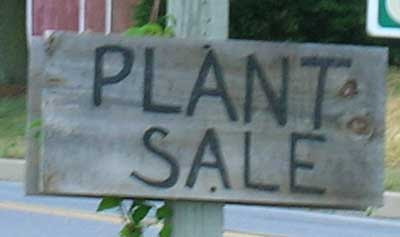 Our plant sale is going on now until we are sold out.
Great prices on everything,
but when they're gone - they're gone.
Posted by Kathy at 11:00 AM No comments:

The wet weather has produced lush growth on established perennials in the garden. I have already harvested oregano, lemon balm, tarragon and catnip. Mints are next. Most of these vigorous perennials can be harvested at least three times during the season. My Italian parsley never died off this winter. It was beautiful throughout April. Now, it has sent up thick stalks which are developing flowers. Seed heads follow and the plant declines. So it's time to yank out the parsley shrubs and replace them with new plants. 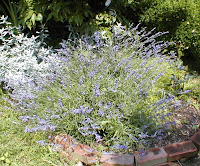 It should be a wonderful year for lavender. The winter was not severe, so I had very little dieback on my plants. They are budded up, waiting for some warm, sunny days. Don't forget to harvest lavender flowers when they are in bud.

Right now, early perennials like catnip, dianthus and Jupiter's beard are either blooming or will be soon. Snow white candytuft is finishing its bloom. Most perennials benefit from being cut back after they bloom. It encourages the plant to push new foliage. And many times, the plants will rebloom later in the season. If you want to gather seed or have your plant reseed, you must allow flowers to die on the stalk. The flowers will be followed by seedheads, with green seeds ripening to a darker color. Flowers on vigorous plants like lemon balm and garlic chives should be removed so they won't reseed everywhere.
Posted by Kathy at 5:04 PM No comments: