I'm very happy to see that the butterfly population has increased.

I know it takes awhile for them to show up, and the larger species aren't around much until July, but things did seem slow until August. I'm seeing swallowtails regularly-mostly tigers, but also a few -black swallowtails. Their host plants (plants on which butterflies lay eggs and caterpillars feed until they form a chrysalis) are parsley, dill, fennel, rue and other plants in the parsley family. So don‘t smush any caterpillars you see on those herbs and you'll be rewarded soon with colorful, flying creatures.

I've sees a few monarchs. No sign of any caterpillars on my swamp milkweed in the garden, although we have plenty of wild milkweed in our fencerow and wild areas. Milkweeds are host plants for monarchs. Other species I've identified include commas, sulfers, hairstreaks, painted ladies, red admirals, buckeyes and sootywings. 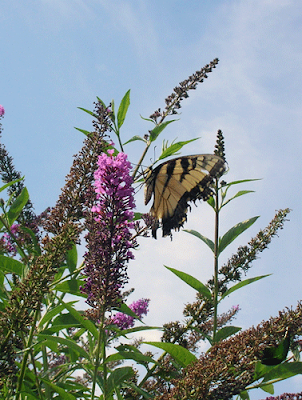 Although I recognized all these as ones I had seen before, I didn't know them all by name. So I referred to my pocket guides to ID them. Both are small and easy to carry along outside. One is the Nat'1 Audubon Society guide. It has great color photos, lists characteristics to help ID, range and habitat and also host plants. The other is a Golden Guide to butterflies and moths. It has drawings, but they are colorful enough and detailed enough to make identification as easy as with a photo. It also gives descriptive details, measurements, range maps, host plants and includes drawings of larva (caterpillar) and pupa (chrysalis) stages. Both are easy to use for adults and older kids and although the text may be beyond younger kids, the photos and drawings can still be used for identification. Butterflies also like shallow puddles or saucers as a water source. Favorite nectar sources for adults include flat-headed flowers with multiple florets, like butterfly bush and swamp milkweed or daisy-like flowers. They need to be able to perch as they feed. What a pretty summer sight - a beautiful swallowtail with extended wings perched and happily feeding on a purple butterfly bush blossom.

It's been one long, hot summer. The weather extremes of the year seem to continue. Of course, we're not suffering through floods or hurricanes so it could be much worse. My summer schedule has been to work outside in the morning end retreat inside by lunch.`

Lucy has figured out the best time for her walks is early in the morning end after supper. She keeps getting up earlier and earlier. Today, she wanted to go out when it was still dark.

Here's another hot weather-cold dish recipe that's always been popular in our family. My mom made this a lot in the summer. The original recipe contains no herbs, but it you wanted to herb it up try adding parsley, dill or even a little mint.

We're still getting requests and question about cilantro. See our previous posting on cilantro for information and advice on its culture.

have HUGE euphorbia or snow on the mountain this year. It reseeded from last year, and with all the ground water from the snow, it got off to an amazing start and just kept growing to about 5 feet tall. It has very small flowers, but its main attraction is the very pretty green and white variegated foliage. I dry it for use in wreaths and arrangements - it makes wonderful, neutral filler. Euphorbias have milky sap, so after cutting, you must seal the stems by dipping in boiling water or sealing with a match or lighter. I get John to help and he uses the butane torch.
Posted by Maryanne at 1:00 PM No comments:

Never the Twain Shall Meet! 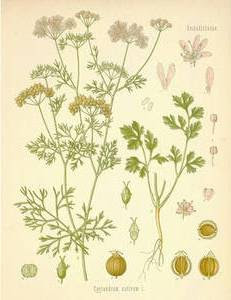 Cilantro is like lettuce - it°s a cool weather annual, with the heat of the summer, (which came early this year) it will bolt, flower and go to seed just like lettuce does then the weather heats up. We sell a slow-bolt variety and you can put your plants in partial shade, but this lengthens the season only slightly. Once it gets really hot, the nature of the plant is to flower, set seed and die.

I always recommend planting early, harvesting foliage and freezing it until tomato season. Allow your plants to flower and seed to drop. You should get a second crop late in the season as the weather cools off. If you can find seed now, you can plant during the second half of August for a late season crop.

In the spring, we carry a plant called Vietnamese coriander. It is a heat tolerant substitute for cilantro. To me, it smells and tastes like cilantro, although smell and taste are very individual. But if you plant cilantro and let it reseed, Vietnamese coriander will give you a substitute during the hot weather between cilantro crops. It is not winter hardy, but stems root easily in water,
if you want to hold some over inside during the winter

Speaking of cilantro, it can add a southwestern touch to the black bean salad recipe I posted a little while back. Just substitute cilantro for the savory in the original recipe and use lime basil in place of regular basil. Lime basil is also great on chicken and fish. I think I like it even better than lemon basil.

Another great basil is cinnamon basil. It's sweet, spicy flavor is far removed from Genovese basil (the one to use for pesto, spaghetti sauce, etc.). Chop it over fresh fruit, brew it for tea, or add a sprig or two to mint tea. You can also steep it in warmed milk, strain out the leaves and use the flavored milk to prepare instant pudding, muffins, quick brands, pound. cake, etc.
Posted by Maryanne at 5:01 PM No comments: