Had two interesting animal sightings lately. Lucy‘s favorite place to explore is the back corner of our property - the wilderness area. It‘s wet ~ after the heavy rains it‘s actually swampy. It's full of grasses and wildflowers and wild plants. Good cover for animals and it has homes for field mice and other small critters for the larger ones to hunt. We get deer that come through from the woods and cornfields behind us. When we first moved here, there were often pheasants in the fall, although I haven‘t heard them for a few years now.

One day we walked around the corner and I thought what is that big, gray blob? Then I saw the long neck and the head and realized it was a blue heron. I was surprised - although it‘s wet, there's no pond and definitely no fish. It moved from the open area to the back of the high plants, so you really couldn't see it unless you were looking. It stayed for a few hours and we were getting concerned that it might be hurt. But it flew away quite effortlessly, so I guess it was just hanging out and resting. I've never been so close to a heron before - it was HUGE!

Lucy would like to go out in the morning when it's still dark, but I make her wait until it’s at least brightening. One morning when we rounded the corner I saw a red fox trotting through the grassy open area to the back, thick area which leads to the woods. I heard a fox passing through the yard one morning when it was still dark-it sounded like a high-pitched dog bark. It must have been moving fast because I heard one loud bark and then two, getting fainter as it was moving off. It certainly woke up Lucy and I put her out in the yard with the light on, but it was long gone by then. It does explain why we're seeing very few rabbits in the last month or so.

One year a red fox had babies underneath our shed. Boy, were they cute! They'd come out at dusk and play, chasing each other and wrestling - just like a litter of puppies. Maybe this one is the offspring of one of those pups.
Posted by Maryanne at 8:55 AM No comments:

A Tale of Two Seasons II

It was a strange growing season-almost like two different seasons. "A Tale of Two Seasons“ we could call it.

In the spring, I remember the daffodils fading fast because we got a blast of hot weather early. The lilacs bloomed in April and the peonies bloomed at Mother's Day, which I don‘t ever remember happening before. All the spring bloomers were lush with the warm weather and the good groundwater from all the melting snow.

Then came mid-summer and the ridiculous temperatures (including 106) and very dry conditions. We water the gardens infrequently since we have a well and concentrate on the potted plants. The basils and mints wilted, but revived after the occasional big rains. Mid-season flowers like coneflower and black-eyed Susan didn‘t bloom A as fully and a lot of my annuals were just stunted. Drought tolerant herbs didn’t mind a bit-my gray santolina was beautiful! 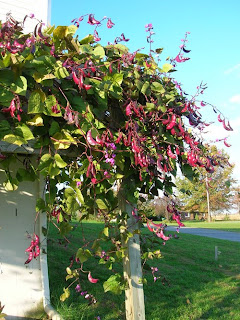 The late season plants were really affected too. It took well into September for hyacinth bean vine to develop beans and its peak seemed to be in October.

Ditto for pineapple sage-full bloom in October, and the plant only got about half as tall as usual. 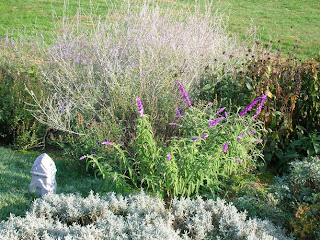 One of the prettiest fall bloomers-Mexican bush sage with its arching, fuzzy purple flowers also didn't bloom till October and was sparse compared to most years.

Things that didn't do well - cosmos, four o'clocks, heliotrope, gem marigolds (although they came back in the fall) nasturtiums, statice, pincushion flower and swamp milkweed.

I was mighty impressed with a new ornamental, oregano-kent beauty, this year. This one is for flowers rather than flavor. They're papery, so they dry well. Start off green and turn pinky-purple. Used them a lot in arrangements-pretty neutral filler.
Posted by Maryanne at 8:52 AM No comments:

More fallout from the hot, dry summer. Our moonflower vine (annual, fragrant, night-blooming morning glory) hasn‘t bloomed in awhile. It certainly blooms better during wet seasons. Our record for blooms This in one evening is 24, and that was definitely in a wet year. This year, it bloomed occasionally, but then shut down during the extended dry spell. This isn't unusual-many plants bloom less or not at all during times of stress. It helps the roots of the plant to survive until conditions improve. I do water the moonflower every day, but it is very hard to duplicate the effect of a soaking rain even if you water every day. The longer the dry spell, the harder it is to get plants to respond. How that we've had some rain, hopefully things will improve.

I did notice some cilantro that reseeded itself in the garden. It grows well early in the season when it's relatively cool. Once the hot weather cones, it bolts like lettuce does. Of course, this year with the weather being very hot and coming early, the cilantro season was short. l always advise people to let some of plants second flower, then seed. The seed falls and you usually get a crop later in the season when it cools off again. My reseeding was sporadic probably due to the dryness. 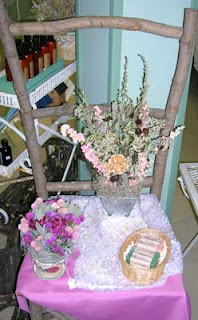 One plant that loved the dry season is gomphrena or globe amaranth. It produces clover-like flowers that are papery and dry well. Colors are a mix of purple, pink and white or red. The plants get quite shrubby in one season and are very productive. My red ones got off to a slow start because something bit off the stalks early in the season. But they‘re producing well now and the mixed colors have loads of flowers. Many of the papery flowers that dry well seen to tolerate drought pretty well. Gray foliaged plants are also drought tolerant. Gray santolina has been wonderfully happy this year-catmint, too.

Greenhouse and shop are open Tuesday-Saturday 9am-5pm. We‘re getting to the end of perennial planting season. The shop has plenty of non-plant herbal products available.
Posted by Maryanne at 10:52 AM No comments:

People ask good questions to which I sometimes do not have an answer. A common one is, when you plant 2 or 3 or 5 of the same plant in an area and only one dies, what happened? I have an example in my garden now. I have three Greek columnar basils planted along the edge in one square of our four square garden. Greek basil is a very nice, upright, bushy form that grows into a small shrub in a season. My line makes a basil 'hedge' in the garden. The plant has great flavor so it's useful in the kitchen, and it has an upright habit that requires no pinching to branch out and it sets few flowers. The two end plants are fine and the middle one is very wilted. That's a pretty easy answer - with the very dry weather, the end plants have taken the soil moisture away from the middle one and once it did rain, the middle one perked Up again, so that was a good guess.

But often, the plants are the same sort, they‘re in the same type of soil and receiving the same cultural conditions. If it's not a disease or insect problem, a soil analysis may indicate a reason. But I generally tell folks, plants are like people - some are stronger than others. Being the same species does not mean the plants are exactly the Same. 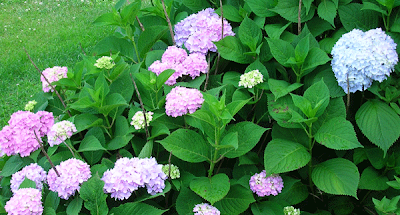 If you're interested in drying hydrangea flowers, now is prime time. They should be starting to dry on the stem - not papery dry, but you feel them, you can notice some moisture is leaving the bloom. I cut mine, strip off the leaves, stand them in a vase and put the vase in a closet (or anywhere away from light.) Some people recommend putting a little water in the vase, but I never found this necessary. They dry in about a week or ten days if it‘s not humid. Newer blooms which replaced flowers I out earlier in the season are still full of moisture, so I'll check them in a couple weeks.
These later blooms really keep their blue color nicely.
Posted by Maryanne at 10:43 AM No comments: