It certainly feels like fall, although we haven't had frost yet. Looking around the garden, I can see the growing season is coming to a close. But looking at specific plants, I'm amazed at how many things still look attractive. 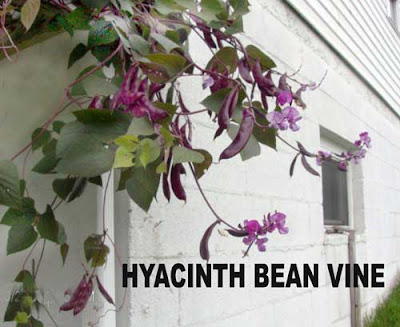 In one bed, viburnum has turned dark red, but also blooming in that bed are bog sage, verbena, nicotiana, pincushion flower and four o'clocks. Next door, in the brick wall garden, bright blue hummingbird sage and dark blue hyssop flower. White cone-flower are done, but the seedheads look pretty alongside the blooms. 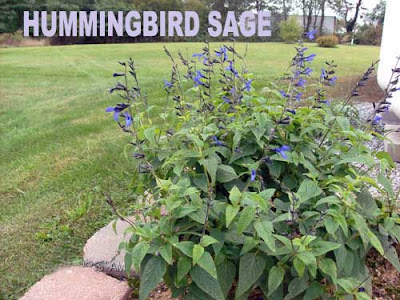 Although customers have told me the hummingbird sage does attract them, this summer we saw it firsthand. We rarely see humming-birds here, But we saw them a couple times, including once at the sage. The other places we saw them - pineapple sage and hyacinth bean vine. That one surprised me - not a tubular flower, they stayed there awhile.

Herbs are looking good, too. Since the rosemary survived last winter, it's blooming nicely now. Purple basil is gorgeous - dark and shiny. Basil will be the first thing to go, so if you want to dry or freeze it, cut it now. Parsley and cutting celery look so nice in the fall. If you've never tried cutting celery, you should. It grows and looks similar to parsley, but tastes like.celery and doesn't produce a stalk. I use it in place of celery in soup, stew, chicken and tuna salad (along with some lime basil) and anything else you use celery for. Dill has reseeded from the mid-summer crop and produced more pungent blue-green foliage.
Posted by Kathy at 2:33 PM No comments: