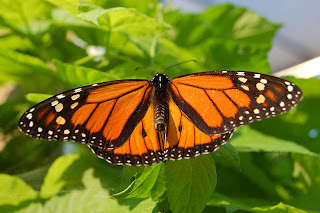 l'm glad that it‘s not just my imagination. I read an article in the Lancaster paper about the smaller than normal number of monarch butterfly sightings this year.  Yesterday, l talked to a friend who is also a master gardener. Although she lives on a larger farm, we both have lots of common milkweed growing on our properties and we both grow more ornamental varieties of asclepias (the host plant for monarch caterpillars). Our numbers tallied -- only a handful of monarch sightings this season. I did not have any caterpillars on our swamp milkweed and didn't notice any on the common milkweed that l could easily see. Same report from various people in different locations in the newspaper article. One fellow with acres of milkweed reported only a handful of caterpillars. The article cited a common problem -- destruction of habitat in Mexico and also the decline in the amount of milkweed in our area. I told my friend that I wish we could get the word out to the monarchs -- we have lots of food for both the caterpillars and butterflies.

Overall, l think the number of butterflies is way down this year and when I compare to the time we moved here, the change is dramatic. Although we had lots of the small whites (loopers, et.al.} and sulfers, the number of different species I saw this year was very small. Not a single buckeye, no commas, one red admiral, one painted lady, no larger fritillarys and dozens, rather than the hundreds of shippers l usually see. It‘s a shame to lose such beautiful garden creatures

One interesting sighting though -- John said he saw an adolescent hawk perched somewhere in the gardens when he was outside. That morning, when Lucy and I were walking early, we heard a bird screeching.  I could tell it was a large bird, but it was back in the treeline and high up so I could not get a glimpse.  But it surely sounded like a hawk.  One day, we saw it sitting on the greenhouse door surveying. I was so glad it didn‘t fly into the greenhouse. I wouldn‘t want to try to get a hawk out! We've rescued mockingbirds, wrens, doves and even a hummingbird from the greenhouses over the years. l imagine a hawk would put up a good fight. 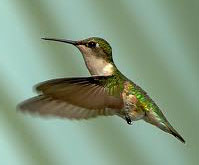 Third sighting of a hummingbird this year. We don‘t get lots of them. It was always a female so I think it was the same one each time. I actually see it most often in the back of the property by the woods where they nest. This time though it was near the pergola, seemed to he investigating the sweet autumn Clematis, which is starting to bloom. That's another wonderfully fragrant plant. Like jasmine (also on the pergola) and our big patch of clove pink dianthus, when you walk around the corner of the greenhouse, it’s just a cloud of sweet aroma.

Also finally blooming is the hyacinth bean vine. The super hot weather in July postponed bud formation. But with the continued rain and the warm Weather, it’s blooming well and beans are forming too. Last year, it bloomed very late and barely any beans were produced. It's so showy when the vines are covered with the shiny purple bean pods.

The vegetable garden is still wild and productive. I canned tomatoes once and l think the next batch I will dry. I grow mostly amish paste and they‘re perfect for drying, Just wash, cut in half and place on a cookie sheet covered with parchment paper. You can season with salt and pepper and some people drizzle with oil, but l just put them in a very low oven (ahout 200) plain and let them go until they get leathery. I store them in bags in the freezer and use them in soups and stews, They can he reconstituted with hot water to use in lots of recipes. The flavor is very concentrated and almost sweet, like tomato paste.

Posted by Maryanne at 5:39 AM No comments: