It seems like we're having an improvement in the butterfly population this year. I'm definitely seeing more species of butterflies and an increase in the overall number compared to last year. Most of them are smaller types - darkwings, skippers and fritillaries, sulphers and whites. Right now, they're are happy with the flowers on hyssop, savory, catmint and lavender. 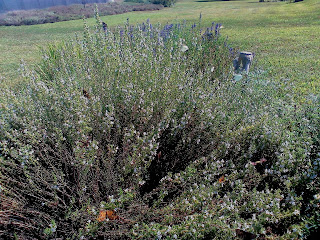 I've seen one monarch. I'm not sure if it's the only one, or if I'm seeing different ones each time. I hope there are several around. Milkweeds are the host plant for monarch caterpillars. In addition to common milkweed, there's perennial swamp milkweed with pink flowers and non-hardy scarlet milkweed with showy yellow to red-orange flowers. These are also nectar sources for the adult butterflies. 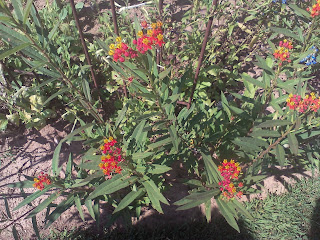 My topiary program went very well. I demonstrated techniques for both a standard or tree form and for a wreath form. Everyone seemed enthusiastic about trying one on their own. I always tell people that making a topiary isn't difficult, but you  must be patient, because it takes time for them to size up. And maintenance is easy. Just give them a haircut when they look shaggy.

If you're harvesting herbs in your garden, we're approaching the time when you want to stop large harvests from woody stemmed plants like sage, thyme and savory. You can certainly continue to clip for use in cooking, but I stop large harvests (up to one third of the plant) around Labor Day. These plants hold their foliage over the winter with the foliage providing protection for the crown of the plant, so you wan to let the bulk of it remain on the plant as it goes into winter.

One exception I make is for rosemary. Mine remains outside for the winter, so I never know if it will survive or not. I just cut it back as often as I wish and if it doesn't survive, I'll replant next spring.

Also be on the lookout for a new crop of reseeded cilantro. If you grew it this spring, and it flowered and went to seed when it got hot, it will often come back from seed that dropped at this time of year, as it begins to cool off. Remember, if you want things to reseed, you must allow flowers to die on the stalk. These will turn into seed heads. Shake the dry seeds onto the ground for reseeding.

Think about fall planting of perennials as temperatures cool down and rainfall increases. Fall planting allows for root systems to develop before winter sets in. Check out our remaining supply of half-price perennial herbs and flowering ornamentals.

Posted by Cloverleaf at 11:18 AM No comments:

It's been quite a season for us  in terms of wildlife sightings. First, two turtles on one day and now, a snake. We see garter snakes infrequently and usually out on the wild, overgrown back corner of the property . Once, we even saw a group of newly hatched baby garter snakes there. This time, it was right in the middle of the garden.

We were cutting back plants in the long side border. Some of the later blooming lavenders needed the spent flowers removed. When I approached  the area, I saw some of the middle part of a snake entwined in the plant. He was sunning himself and although we couldn't see either the head or tail, he was about two inches wide. Based on that, John guessed he was between two and three feet long. We gave him a wide berth and did not trim off the flowers. He hung around awhile, but eventually slithered away and the spent flowers got trimmed.

The gardens perked up with the recent rain and slightly cooler temperatures. So I'm continuing to harvest herbs for drying and flowers for the shop. This is also the time of year I make dried wreaths and arrangements for the shop. It gives me a chance to work inside on hot days.

And believe it or not, I'm starting work on my plant orders for next spring! I have to order early to insure getting specific choices and it doesn't always work. Crop failure are two words  you don't like to hear in the plant business.

Also in August, I'm presenting a program on herbal topiaries for a west shore herb group. Topiaries always attract people's attention in the greenhouse. I guess it's the idea of a miniature tree that is so interesting. Also have a mother's group coming to the farm to learn about harvesting and preserving herbs.


The plant sale continues and all small plants, except bay, are half off. Late in the season is an excellent time to plant perennials so the roots have time to get established before winter sets in. We
are out of a number of varieties, but still have a good selection of perennial herbs and ornamentals.

Verbena is an annual that has always reseeded in my garden, even after a severe winter. Flowers sit atop wiry stems about three feet tall. Although tall, they are a "see through" plant and can be planted in the front of a bed without blocking the view of plants behind them. Pretty pink-purple flat headed blooms attract butterflies and go throughout the summer. 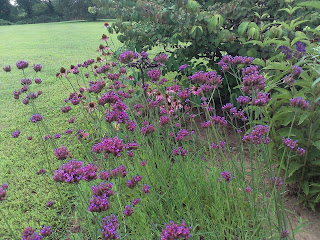 Plumbago is a spreading perennial that is covered with blue, actually blue, flowers nearly all summer. Flowers described as blue are often really purple. One year, I went searching for truly blue flowers and found plumbago. Flowers are small, but prolific and a beautiful azure shade. Plumbago spreads easily, but is not invasive. It takes minimum care, but is late to emerge in the spring. 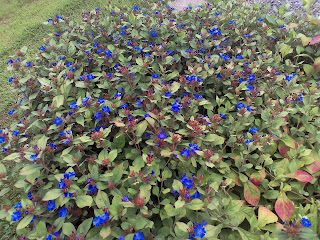 Posted by Cloverleaf at 12:17 PM No comments: